​Ritz Parade Redevelopment
Posted July 23rd, 2015
Ritz Parade on Bowes Road is a significant landmark. Currently it is run down, but it is planned for redevelopment as part of The North Circular Area Action Plan: It is even to be a “Neighbourhood Centre,” a focal point in the development.

Yet, despite the North Circular Area Action Plan having been adopted long ago and construction having already started on other sites no report has yet been published which defines the options for Ritz Parade.

At the November meeting of the Southgate Green Ward Forum we were informed that three options had been identified and were being “tested”. We were also told that consultation with stakeholders was likely to be in January 2015 and with the public in March.

We were later informed that publication of the related report would be in April, but this date has now moved to September without any explanation for the slippage. It is quite unacceptable that the public has still not been consulted and we still know nothing about the scope of the redevelopment and whether the regeneration will extend to the south. Nor do we know anything of the planned architecture, how much housing is to be included, building heights, or amenities (doctors, shops, community facilities, all previously promised). Nor are we aware of what initiatives LBE has taken to encourage new businesses to occupy the development in order to regenerate the area.

So, is the sad story of 40 years planning blight to become 50 years? The public hopes not, but wants to be informed and involved.  Let us know your views on this.
Minutes of BHORA's Annual General Meeting on 30th June
Posted July 9th, 2015

Many thanks to those of you that attended our AGM last week.  >>Read BHORA Minutes from the AGM

The meeting started with a presentation of the Chairman's Report, followed by re-elections for Ordinary Committee members - on the Executive Committee sadly Caroline Chenier stepped down as Chairman, leaving the position currently vacant.  We wish Caroline all the best in her immediate commitments and look forward to having her join the Ordinary Committee later in the year.

In the ensuing Open meeting, Karl Brown gave a very interesting and startling presentation on Air Quality, a subject which indiscriminately affects us all.  With impacts on health being what smoking was 30 years ago this is a very serious matter for which we should all consider doing something to improve.
>> Air Quality notes by Karl Brown
>> GLA Report on Air Quality (1.8Mb)

The meeting ended with a Raffle for a bottle of Champers.
BHORA Annual General Meeting on 30th June.
Posted June 11th, 2015 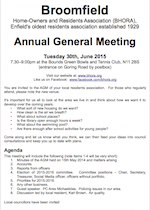 Come to our ANNUAL GENERAL MEETING on Tuesday 30th June at Bounds Green Bowls and Tennis Club  7.30pm - 9.00pm.  On the agenda we have....
Local Councillors have been invited.

Please come along and share your views.
>> View the flyer

PWA are currently preparing a draft response to some proposed changes to Haringey Council’s Local Plan and supporting documents.

This is our last chance to influence the Council and urge them to protect the Pinkham Way site which is being revealed as holding an increasingly rich biodiversity. It’s absolutely vital therefore that we collect as many signatures as possible in support of our response (an amazing 900 of you signed up to their previous submission, and this needs to be beaten by a distance!).  Details of the PWA response are on their website:

Please visit the PWA website for details, and add your name to the Pinkham Way Alliance response.

The deadline for signing is 5pm on Wednesday, 25th March. 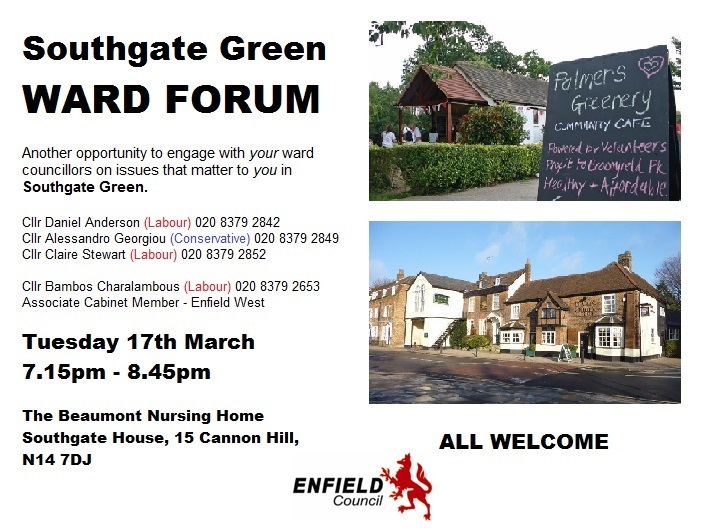 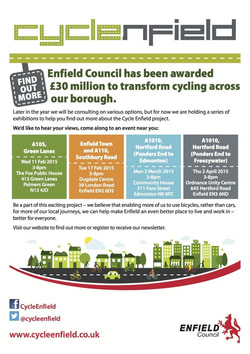 Enfield Council has been awarded £30 million to transform cycling across our borough. The A105, Green Lanes is included in this project.

Later in the year Enfield will be consulting on various options, but for now a series of exhibitions are being held across the borough where you can find out more about the Cycle Enfield project.

View the flyer for more details or visit www.cycleenfeld.co.uk

An Appeal to Support Your Residents' Association
Posted January 10th, 2015 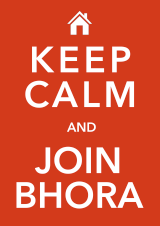 I would like to wish you all a happy New Year, and ask you to make supporting BHORA a resolution for 2015.

As ever BHORA is committed to being vigilant over planning applications within the BHORA area,  and holding the Council to task when they fail to provide proper notifications or suitable plans.  Our efforts last year helped to see off proposals for a McDonalds Drive Thru on the Bowes Road, which would have been in close proximity to two schools.  With future redevelopments such as the Bowes Road Ritz Parade being on the Councils' radar, we make a much needed plea for your support.

Please join BHORA to make sure the Council and developers know what our community needs. Working together we can make huge improvements to the area.